START FROM THE END 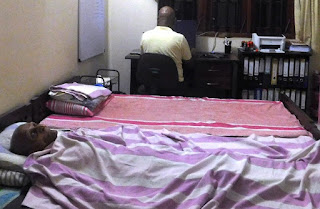 Just after a couple of days from my father’s funeral, Para asked, “Why don’t you continue to share your days with your dad? A few days ago, Mr Bernard from Free media Movement said to me “You should continue to write?
“Where am I to start?”
“Start from the end? Obviously Para would help you,” answered Mr Bernard.
Let me begin, “I am not the best son on this earth. There were many lapses on my part. There were instances that I lost my temper. There were instances that my dad lost his temper. There were many instances where at the end both of us cried together.” But I was beginning to feel that such emotional reactions further strengthened the bond between us.
Day by day, his world became narrowed. He preferred isolation and to keep an eye on me. He seemed to enjoy the fantasy that he was the protector of his son. For the aged category, the loss of being in the caregiver role to others may make them feel useless or worthless. The role reversal is especially hard for those who have had lifelong caregiver roles. This is specifically proven by my father, who had become the caretaker of our family of two before entering into long term care for over a decade. His bedroom became our office room, our dining room, our changing room and the bedroom for both of us.
At times he used to sit on my side on the bed closer to the writing table to invite my attention to him. If I happened to pay more attention on my work, he would be disappointed. His response was to sleep horizontally on the bed leaving no room for me to lie beside him.
I am yet to start from the end. I sat beside him on the bed. I held him with my right arm over his shoulder. He drank the first sip of tea. Then he looked at me and leaned more towards my shoulder. All of a sudden his body was motionless.
“Death is the meaning of life” my mind spoke to me. Still I do not remember when and where I picked up that sentence. I laid down the body on the bed. I leaned and kissed his forehead for the first time and the last. Even at death, his appearance was calm.
hAdapted from praja.lk